There are two Windows versions available. INT is played through the Gamemaker 2 interpreter whereas YYC is fully compiled and may run better for some people. Either will probably just work fine, so take you pick.

This game was my first solo project with GMS 2 and I used it to learn how the dev system worked for tiles. I left it almost finished when I decided to enter a game jam back in 2018 and recently decided to pick it back up and finish it. This ended up being almost a complete rewrite.

The objective is to conquer all 20 caves by picking up at least the minimum amount of diamonds from each cave to allow the exit to open and progression to the next cave. The laws of gravity mostly apply in this top-down scrolling game so removing dirt from under a rock will cause it to drop. You can move directly under one but, once you move away, you don't want to go under it again as you'll end up with a bit more than a headache.

As well as contending with the rocks that block your path to riches, there are also fireflies and butterflies that will wander the cave when released. You need to avoid these but some caves are going to require you to destroy them with rocks so you can get enough diamonds to finish the cave. These are not your only hazards as the Amoeba is also back and will spread itself wherever it can in the caves it exists and, if you let it grow too big, then it's going to convert to rocks once suffocated, rather than the required diamonds.

The magic walls are also present and how they work is something you will need to suss out for yourself.

As well as a super-fun arcade game there are numerous puzzle elements that require a bit of strategy to clear some of the caves. All of the caves are recreated from the original game so players who have played that will feel very much at home with this remake.

Note: there are lots of remakes of Boulderdash already out there and even some commercial entries. I am specifically releasing my version as completely free so as not to profit from it in any way and impact on any revenue that these remakes potentially generate. The graphics in-game are reworked slightly based on the original game and the title screen is completely different as I did not want the game to completely copy what the original did. Just make a modern interpretation that played as well as the original. I also added stuff like difficulty levels with an optional timer and a few other bits.

Note that the original game only let you choose a start cave 1,5,11 and 13. I've kept to this design.

Controls in the game:
Q - quit to title screen.
P - toggle Pause mode.
R - restart level with a loss of a life (use if you get trapped).
Cursor keys to move Rockford.
Space to interact with a direction.

To interact with a block rather than attempt to move into it is done by holding space and a directional key. In the case of dirt this will dig out the dirt but not move Rockford into that square. This is good for releasing rocks without risking death by moving under it. If you interact with a rock and it has a space next to it then it will roll into that space. You can also interact with a diamond to collect it without moving into its spot.

Also I have left in the developer cheat mode which you may be able to find, if you're clever, but I will post it here at a later date. If you're really keen to look further in the game, and it's a bit tough for you as is, then email me and I'll help you out :)

Game graphics were reworked from the original game.

With thanks to Mike Dailly for giving me the idea - indirectly.

This is excellent, very slick. I have detected a bug however. On the level with the 8 squares each with a single firefly and a single diamond. After completing the level and entering the exit, the Fireflies can still kill you while waiting for the bonus to countdown. If this happens you lose a life and have to redo the level. Sprite collision should  be turned off once the gate is entered!

Hmm, that is interesting. It's been a while since I looked at the code for this but that part of the game was written very early on so I missed that as I was getting pretty good at the game once I finished writing it. I've been meaning to update the project anyway so this will give me a good excuse. Keep an eye open for an update on the page in a week or so. 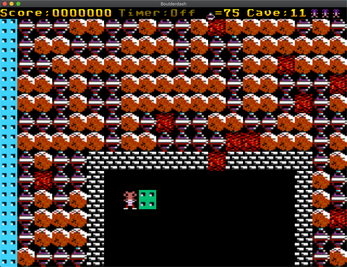 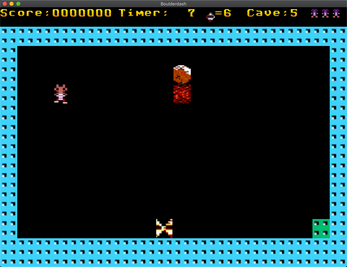 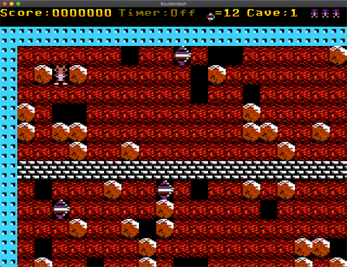